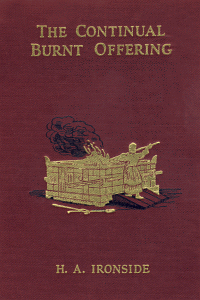 Look Inside
The Continual Burnt Offering
Daily Meditations On The Word of God
By: Harry A. Ironside (Author)
Publisher: Horizon Press
Category: Devotionals

Today there is no longer any material altar, nor need for any repetition of the sacrifice of the cross toward which all the Old Testament offerings pointed. But the Lord's people are exhorted to offer the sacrifice of praise continually. This book of daily meditations has been prepared with that goal in view.

Recording Artist Phil Keaggy used The Continual Burnt Offering to write the songs Quite Suddenly and Beneath The Blood-Stained Lintel from his album Way Back Home.