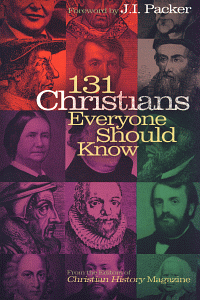 If you think history is boring, take about three minutes to scan through 131 Christians Everyone Should Know. Zero in on an article and you may find that you cannot read just one.

These sketches have been put together by the editors of Christian History Magazine, who have an impressive track record for making history come alive every month for their readers.

Note the diversity and different callings:

Each personality sketch includes a timeline that gives the historical context in which that person lived. This book also contains a topical index that will help you find illustrations for teaching and preaching.

Mark Galli is senior managing editor of Christianity Today. He has also been an editor with Christian History and Leadership. He is a graduate of Fuller Theological Seminary (M.Div.) and the author of Francis of Assisi and His World, and Jesus Mean and Wild: The Unexpected Love of an Untamable God. He is married and has been worshiping in the Anglican tradition for nearly 20 years.

Ted Olsen is news director and online managing editor of Christianity Today. He has been writing the magazine's online Weblog—a collection of news and opinion articles from mainstream news sources around the world—since 1999. In 2004, the paper version of the magazine launched Weblog in Print, which looks for unexpected connections and trends in articles appearing in the mainstream press. The column was renamed "Tidings" in mid-2006 and now runs monthly.