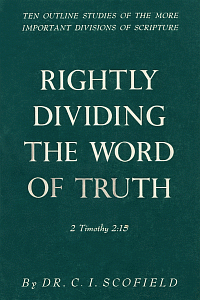 In 2 Timothy, the believer is presented in seven characters. He is called: a son verse 1; soldier verse 3; an athlete verse 5; a husbandman verse 6; a workman verse 15; a vessel verse 21; and a servant verse 24.

The purpose of this book is to indicate the more important divisions of the Word of truth. That this could not be fully done short of a complete analysis of the Bible is, of course, evident. But it is believed that enough is given to enable the diligent student to perceive the greater outlines of truth and something of the ordered beauty and symmetry of that Word of God which, to the natural mind, seems a mere confusion of inharmonious and conflicting ideas.

Cyrus Scofield was born in Lenawee County, Michigan in 1843. During the American Civil War he served for a year as a private in the 7th Tennessee Infantry. By 1866 he was in Missouri working in his brother-in-law's law office. Admitted to the Kansas bar in 1869, he was elected to the Kansas legislature as a Republican in 1871 and 1872 and was appointed U.S. attorney for the district of Kansas.

After his conversion to evangelical Christianity in 1879, Scofield assisted in the St. Louis campaign conducted by Dwight L. Moody and served as the secretary of the St. Louis YMCA. Significantly, Scofield came under the mentorship of James H. Brookes, pastor of Walnut Street Presbyterian Church, St. Louis, a prominent dispensationalist premillennialist.

In 1883 Scofield was ordained as a Congregationalist minister, and he accepted the pastorate of the First Congregational Church in Texas, now Scofield Memorial Church. The church grew from fourteen to over five hundred members before he resigned its pastorate in 1895.

Scofield also served as secretary of the American Home Missionary Society of Texas and Louisiana; and in 1890, he helped found Lake Charles College (1890-1903) in Louisiana. As the author of the pamphlet, "Rightly Dividing the Word of Truth" (1888), Scofield himself soon became a leader in dispensational premillennialism.

In 1895, Scofield was called as pastor of Moody's church, the Trinitarian Congregational Church of East Northfield, Massachusetts, and he also took charge of Moody’s Northfield Bible Training School. Although, in theory, Scofield returned to his Dallas pastorate in 1903, his projected reference Bible consumed much of his energy, and for much of the time before its publication, he was either sick or in Europe. Scofield shortly left the Congregational Church to become a Southern Presbyterian and moved to the New York City area where he supervised the New York Night School of the Bible. In 1914 he founded the Philadelphia School of the Bible in Pennsylvania, now Philadelphia Biblical University.

Scofield believed that between creation and the final judgment there were seven distinct eras of God's dealing with man and that these eras were a framework around which the message of the Bible could be explained. It was largely through the influence of Scofield's notes that dispensationalism and premillennialism became influential among fundamentalist Christians in the United States. Scofield passed away at his home in Douglaston, Long Island, in 1921.