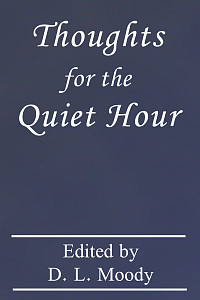 From the Preface by D.L. Moody:

"One of the brightest signs of the times is that many Christians in our young people's societies and churches are observing a "quiet hour" daily. In this age of rush and activity, we need some special call to go apart and be alone with God for a part of each day. Any man or woman who does this faithfully and earnestly cannot be more than twenty-four hours away from God.

This selection was first published in the monthly issues of the Record of Christian Work and was found very helpful for devotional purposes. It is a mine of thoughts to light up the verses quoted. Being of permanent value, it has been thought desirable to transfer it from the pages of the magazine to this permanent volume.

May it have a helpful ministry, leading many into closer communion with God!"