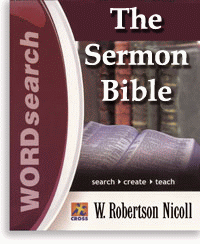 Under Every Text Will Be Given:

Sir William Robertson Nicoll was an ordained minister of the Free Church at Dufftown, Banffshire. In 1886 he moved south to London and began his editorship of The Expositor and the British Weekly, posts which he held for the rest of his life. He made the British Weekly widely influential, published several religious and secular books, was knighted in 1909, and was made a member of the prestigious Order of the Companions of Honour two years before his death in 1923.

Nicoll was a prolific editor of expository works and left behind a literary legacy that has placed all preachers in his debt. This scholar is rightly remembered for such works as The Expositor's Bible, The Expositor's Dictionary of Texts, The Sermon Bible, Expositor's Greek Testament, all of which he edited.

A very complete guide to the sermon literature of the day.

We do not hesitate to pronounce this the most practical useful work of its kind at present extant. It is not a commentary, but a Thesaurus of sermons on texts arranged consecutively, chapter by chapter and book after book... We are bound to say that the object announced by the compilers is on the way to be realised, and here will be given the essence of the best homiletic literature of this generation.