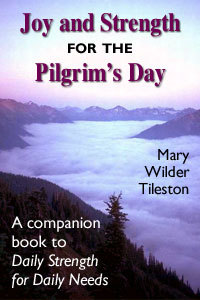 This little book is a selection from writers of many countries and centuries. Joy And Strength For The Pilgrim's Day contains thoughts of courage, faith, hope, and love, to cheer and inspire the pilgrim in his daily journey, whether it be in clouds or sunshine. It is to remind him of what he can do to help his fellow-travelers. With this book may his evening and morning be serene as in the old story—"The Pilgrim they laid in a large upper chamber, whose window opened towards the sun-rising: the name of the chamber was Peace; where he slept till break of day, and then he awoke and sang."

Mary Wilder Foote was born in 1843 in Salem Massachusetts. She was the daughter of Caleb Foote, owner and editor of the Salem Gazette, and Mary Wilder who was a devout Unitarian. Mary met and married John Boies Tileston and had seven children. They lived on a milk farm of two hundred acres in Concord, Massachusetts until 1882. They moved to Milton and resided there until her husband death in 1889. Mary decided to travel and she went abroad with her three daughters for a year and returned to Boston where she lived for eight years. She returned to Milton in 1907. Mary was a much celebrated author of many devotionals, she died in 1934.