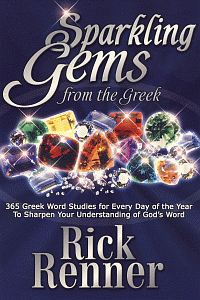 Look Inside
Sparkling Gems From the Greek
365 Greek Word Studies For Every Day Of The Year To Sharpen Your Understanding Of God's Word
By: Rick Renner (Author)
Publisher: Teach All Nations
Category: Devotionals

In Sparkling Gems From the Greek, author Rick Renner unearths a rich treasure trove of truths in his remarkable devotional. Drawing from an extensive study of both the English Bible and New Testament Greek, Renner illuminates 365 passages with more than 1,285 in-depth Greek word studies. Far from intellectualizing, he blends his solid instruction with practical applications and refreshing insights. Find challenge, reassurance, comfort, and reminders of God's abiding love and healing every day of the year.

About the Author
Rick Renner is a highly respected leader and teacher within the global Christian community. Rick first fell in love with the Greek New Testament when studying Journalism and Classical Greek at the University of Oklahoma. In the years that followed, he continued his extensive study of the Greek New Testament, later earning a Doctor of Philosophy in Ministry.

With over 25 books published to date, Rick Renner has become known for his scholarly approach to the Greek language while he breaks down its components in such a way that the average reader can comprehend and absorb the depth of meaning it contains. After ministering widely throughout the United States for many years, Rick answered God's call in 1991 to move his family to the former Soviet Union and plunge into the heart of its newly emerging Church.

Today Rick's television broadcast Good News with Rick Renner can be seen across the entire former USSR. He has also distributed hundreds of thousands of teaching audio and videotapes, and his best-selling books have been translated into Russian, Polish, French and German. In addition to pastoring two fast growing congregations, Moscow Good News Church in Russia and Kiev Good News Church in Ukraine, Rick is the founder of the Good News Association of Churches and Ministries, through which he assists and strengthens almost 800 churches throughout the former Soviet Union.

I think of Rick as the 'apostle to Russia' for our day. His new book, Sparkling Gems from the Greek, is Rick as I love to hear him—mining practical, life-changing revelations from his exhaustive study of the Greek. I look forward to discovering Rick's gems on a daily basis. This is an important book, a treasure.