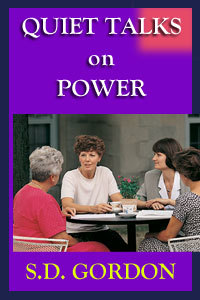 Quiet Talks on Power, the best-selling book in the "Quiet Talks" series, explores the awesome potential for spiritual power lying dormant in the life of everyone. Everyone craves power—power to change their lives and circumstances—but few have it. Gordon will expose the channels of your heart to the cleansing flood of God's grace preparing it for an overflow of Divine power. In his unique descriptive style, Gordon avoids trite phrases as he prepares your soul to be connected to the Divine source. You see, power is not a thing, it is a Person. Once properly in union with Him the power can flow. Open your heart and then open the book — and let the power flow.