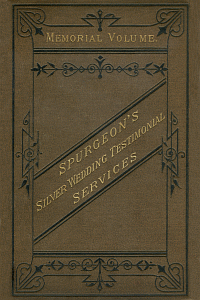 Memorial Volume: Sermons and Addresses delivered in the Metropolitan Tabernacle, Newington, in connection with the presentation of a Testimonial to Pastor Charles Haddon Spurgeon, to commemorate the completion of the Twenty-Fifth Year of his Pastorate, with selection of Music sung on the occasion.

This is a record of the services which the congregation of the Metropolitan Tabernacle conducted for their pastor on his 25 year anniversary as their pastor. Included are addresses and sermons that you will not find anywhere else! There is no table of contents to the work, but it contains Spurgeon's Sunday morning and Sunday evening sermon. A record of the Monday praise meeting, including Spurgeon's address to his congregation. A record of the Tuesday evening testimonial meeting including a retrospect delivered by one of the deacons. A presentation by the London Baptist Association. A short address by Spurgeon's brother James, as well as his son John, and the presentation of the testimonial by William Olney. All throughout are included Spurgeon's responses and words to the speakers and the congregation as the services progressed. The inclusion of the dialogue given after one man would speak and Spurgeon would rise up to say a little something gives a clear picture of the relationship between the pastor and the church.

About the Author
Few people in history can be known by one name and have it ring true with their audience, and Charles Haddon Spurgeon is one of them. Over time, Spurgeon has become known and revered as the "Prince of Preachers". In the last 100 years he has been one of the most influential men for not only Preachers of the Gospel but for those who have not had the opportunity to hear and receive the Gospel message. He wrote tirelessly over his life, and WORDsearch Bible Software is committed to bring as many of Spurgeon's works as possible to you in electronic form.