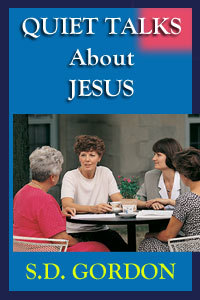 Part of the Quiet Talks Series, Samuel Dickey Gordon paints a remarkable portrait of this Jesus, with vivid imagination. You will see Jesus as you have never seen Him before and understand Him more wonderfully than you ever thought possible. Gordon describes Jesus' love, mercy, and His plan for you as the unique object of His love. You can actually feel His presence within as you read the yearning of His heart for you.