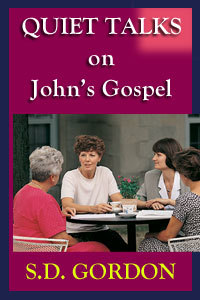 Part of the Quiet Talks Series, Samuel Dickey Gordon unlocks the subtle truths of John's Gospel in a friendly, intimate manner. Taking a "Common Folk" approach, Gordon offers his insights to help us deeply understand the nature of God and the revelation of Jesus. Through the Gospel of John, Gordon finds the essence of Christ's mission on Earth: the cultivation of His Love.