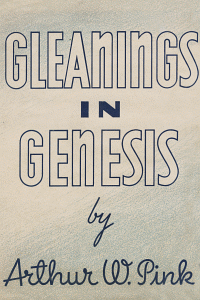 The opening book of the Bible has always had peculiar interest for the people of God, and it is strange that there are so few commentaries on it of real merit and value. Some deal with the historicity and the Divine inspiration of Genesis, but the majority of our readers are fully established on these points. Others write from the devotional viewpoint and speak of the relevance in our lives today.

This book does not contain the mere generalizations and platitudes that are familiar to almost everybody, for it has not been written hurriedly. Each chapter has been studied carefully and prayerfully for hours, and many are the precious treasures which the Lord has enabled His servant to bring forth out of His inexhaustible Storehouse. Particularly striking is the clear delineation of the types. The character studies of Enoch, Noah and Abraham are, alone, well worth the price of the whole book.

Gleanings in Genesis is written in a most fascinating style. The reader's interest is gripped from the start and held to the finish. It is not heavy reading, yet it is edifying to the soul. It furnishes real food for the believer served in a form easily digested.

Gleanings in Genesis will delight the hearts of preachers and teachers. It contains a wealth of material which can be used in the pulpit and Sunday School class.

Heavily typological, but contains helpful, practical observations on the text.

In spite of his tendency to spiritualize and go to extremes in typology, Arthur W. Pink is very helpful.