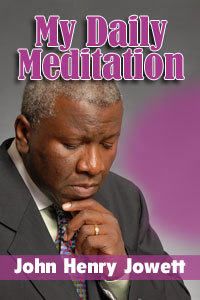 A series of choice, tabloid talks, which include a spiritual meditation for every day of the year. The lessons Dr. Jowett seeks to convey are propounded so as to enter the understanding of his readers along a pathway of light. The whole volume is of true mintage, bearing the impress of Dr. Jowett's ripest thought and fruitful mind.

The greatest living master of the homiletic art.