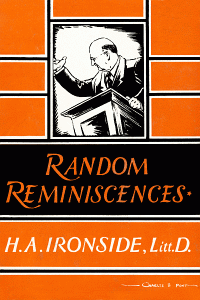 This collections of writings from Ironside's contributions to the magazine "Revelation" offers a unique insight into the life of Harry A Ironside. In the spirit of Proverbs 27:17, Ironside's hope was that by sharing from his own life, he might help the reader, thus "Iron sharpens Iron".

It is a rare combination, indeed, when a man is both a master of Bible exposition, based on a lifetime of arduous study, and an outstanding author from the stand point of clarity, accuracy and popular style. All of this is noticeably true of Dr. H. A. Ironside, (former) Pastor of the great Moody Memorial Church, Chicago.