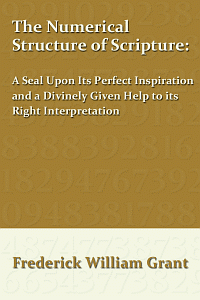 Look Inside
The Numerical Structure of Scripture
A Seal Upon Its Perfect Inspiration and a Divinely Given Help to its Right Interpretation
By: Frederick William Grant (Author)
Publisher: Wordsearch
Category: Study Helps

About the Author
Frederick William Grant was born in the Putney district of London on July 25, 1834. Originally ordained a minister of the Anglican Church, he left his pastorate to join the Plymouth brethren. It is generally agreed that John Nelson Darby, William Kelly and F.W. Grant are looked upon as the three most prominent teachers among the early brethren. Grant's writings were a strong influence on C.I. Scofield. Grant is the author of many works such as Genesis in the Light of the New Testament, The Numerical Bible, The Crowned Christ, Spiritual Law in the Natural World and many others. Grant also served as the editor of the magazines Helps By The Way and Help and Food.