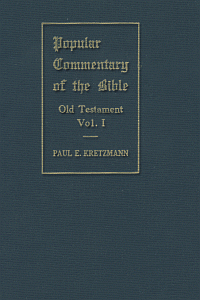 Look Inside
The Popular Commentary of the Bible
By: Paul E. Kretzmann
Publisher: Wordsearch
Category: Commentaries

The Popular Commentary is Lutheran to the core. Dr. Paul E. Kretzmann's commentary reproduces Luther, his theology and religion, his faith and piety. Dr. Kretzmann's commentary offers to Lutheran Christians nothing but sound, scriptural doctrine on the basis of believing, Biblical scholarship. Because of this, the Popular Commentary possesses a unique distinction. It is a popular commentary in the truest sense of the term; a commentary for the people and offering to the people nothing but unalloyed exposition of the Bible.


Paul Edward Kretzmann was born in Farmers Retreat, Indiana in 1883. His early education started in Fort Wayne, Indiana at Concordia College and he went on to earn his Ph.D. and D.D. at Concordia Seminary in St. Louis Missouri. From 1906-1907 he moved to Shady Bend, Kansas to pastor a church and in 1907-1912 he resettled in Denver, Colorado. Kretzmann then traveled to St. Paul, Minnesota where he accepted a professorship at Concordia College from 1912-1919.

Concordia's Literary Board of 1918 initiated the undertaking of The Popular Commentary and, after very mature consideration, nominated the author and drafted the general character and scope of this popular commentary. Accordingly Kretzmann, was called from the position of instructor to work on this project. The two volumes on the New Testament were published in 1921 and 1922 respectively and in April of 1923 Kretzmann wrote the concluding chapters on the Old Testament. He helped form the the Orthodox Lutheran Conference in 1948 and was president of it's seminary in Minneapolis, Minnesota.

Kretzmann was the author of many books such as Education Among The Jews, The God of the Bible and other "gods, The New Testament in the Light of a Believer's Research, Calvary Revisited : Lenten sermons and It is the King!