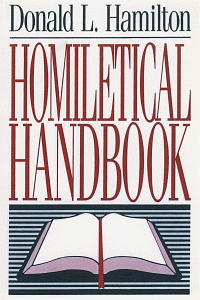 Homiletical Handbook is a primer for those who are called to preach. It is intentionally simple in its explanation of the homiletical task and straightforward in getting to the point. It is solid in its theology and biblical in its approach. Students, ministers, and teachers of homiletics will welcome this text. There are also three appendixes dealing with variety in preaching, the sermon proposition, and sermon illustrations.

About the Author
Dr. Donald Lloyd Hamilton is a graduate of Trinity Evangelical School, M.Div. and Bethel Theological Seminary, D.Min. Since 1982 Dr. Hamilton has been the Doctor of Ministry Program Director for Columbia International Biblical Seminary and Graduate School of Missions, Columbia, South Carolina. He has been listed in Who's Who in Religion and in Outstanding Young Men in America. Before coming to Columbia in 1982, he served on the staff of Youth for Christ in his native northeastern Ohio and as part-time instructor at Minnesota Bible College. He also served as pastor of congregations in Ohio, Pennsylvania and Minnesota.