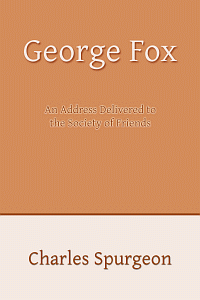 This very personal address by Charles Haddon Spurgeon reflects on the life and legacy of George Fox. This is an example of one of Spurgeon's greatest attributes - his ability to praise and revere someone for their contribution to God's Kingdom, although, he might highly disagree with them personally. As Christians we can all draw a great deal from Spurgeon's example in this address.