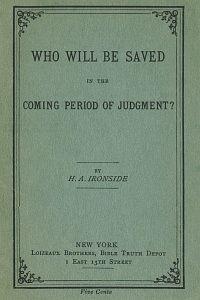 Look Inside
Who Will Be Saved in the Coming Period of Judgment?
By: Harry A. Ironside (Author)
Publisher: Wordsearch
Category: Sermon Helps, Sermons

In this short booklet, Dr. Ironside briefly explains via Old and New Testament Scriptures what is meant by the "period of judgment." He takes the reader through passages that explain significant end-time events, and, finally, he then gives treatment to what judgment will mean for those who believe and those who do not - whether Jew or Gentile.