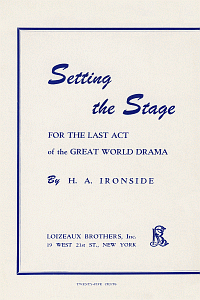 Look Inside
Setting the Stage for the Last Act of the Great World Drama
By: Harry A. Ironside (Author)
Publisher: Horizon Press
Category: Sermon Helps, Sermons

In this address, Dr. Harry Ironside breaks down the end times into a traditional five act play, with the last act focusing on the time after Christ's death.