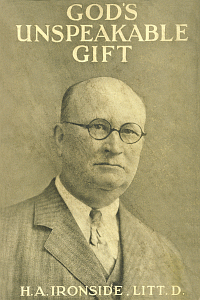 The Riches of His Grace might well be an apt description of these twelve forceful Gospel appeals, which were first of all delivered to audiences of three thousand people in the Moody Memorial Church, Chicago. Though spoken extemporaneously, and primarily intended to bring conviction, life, and peace to many, yet they contain much helpful matter of an expository nature which cannot fail to refresh the soul of those who wish to company with their Lord in the "valley of gladness," "giving thanks unto God for His Unspeakable Gift."

H.A. Ironside gives a helpful seven-fold categorization of the gospel in the New Testament in this classic book.