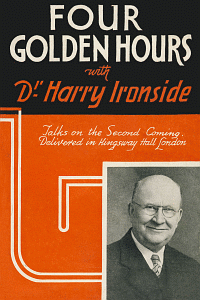 Dr. Harry Ironside's addresses delivered at Kingsway Hall, London expound on the Scriptures which tell how the Second Coming of the Lord Jesus Christ will affect the Jews, the Gentiles, and the Church of God.

This simple statement is eminently suitable for widespread circulation as a first book to read on this vitally important subject.