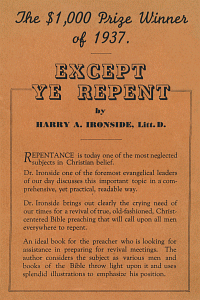 Repentance is one of the most neglected subjects in Christian belief. Dr. Harry A. Ironside discusses this important topic in a comprehensive, yet practical way.

Dr. Ironside brings out clearly the crying need of our times for a revival of true, old-fashioned, Christ-centered Bible preaching that will call upon all men everywhere to repent.

An ideal book for the preacher who is looking for assistance in preparing revival meetings. The author considers the subject as various men and books of the Bible throw light upon it and uses splendid illustrations to emphasize his position.

About the Author
Dr. Henry (Harry) Allan Ironside received his degree of Doctor of Literature from Wheaton College. He began preaching in Los Angeles at the age of fourteen and has been a Bible teacher, Evangelist and Preacher ever since. He has been President of the Western Book & Tract Company since 1912. For six years he was professor of Biblical Literature at the Evangelical Theological College at Dallas, Texas. Since 1930 he has been Pastor of Moody Memorial Church, Chicago, Ill. The church has a membership of over 4000. Dr. Ironside preaches twice each Sabbath to audiences of over three thousand at each service.

Dr. Ironside is widely and favorably known throughout United States, Canada and Great Britain. He is one of the most outstanding Bible teachers and preachers of our day, a man of God, with a message from God, which he delivers in the power of God. His life is a benediction to all who know him and his ministry has enriched the Christian church. He is the author of over thirty volumes, many booklets and numerous articles in the religious Press. From the long list of his published works, mention should be made of Notes on Jeremiah, The Minor Prophets, Notes on Proverbs, Ezra, Nehemiah, and Esther, Lectures on Daniel the Prophet, Lectures on Revelation, Lectures on Romans, Lectures on Colossians, Lectures on the Epistles of John, Notes on Hebrews and Titus. He is also the editor of The Moody Church News.