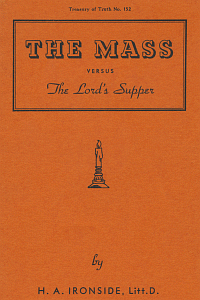 Look Inside
The Mass versus the Lord's Supper
By: Harry A. Ironside (Author)
Publisher: Wordsearch
Category: Sermon Helps, Sermons

In this sermon Dr. H.A. Ironside compares the Catholic Mass with the Protestant Lord's Supper. Ironside begins his exposition with reference to Hebrews 10, expounds on the finished work of Christ, discusses the simplicity and meaning of the Lord's Supper, approaches the history of the Lord's Supper, the influence of heathenism on the Mass, and concludes with a call to revival.