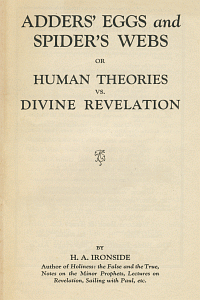 In Adders' Eggs and Spider's Webs, Dr. Ironside examines the text of Isaiah 59. He challenges believers to reject the webs of human teaching and instead cling to the incarnate Word - Jesus Christ.