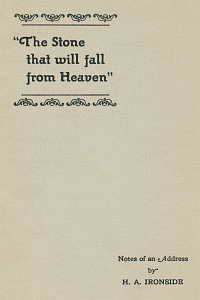 Look Inside
The Stone that Will Fall from Heaven
By: Harry A. Ironside (Author)
Publisher: Horizon Press
Category: Sermon Helps, Sermons

In this short address, Dr. Ironside expounds on the parable found in Matthew 21:42-44. Ironside interprets the parable in its historical context and also sheds light on its future fulfillment.