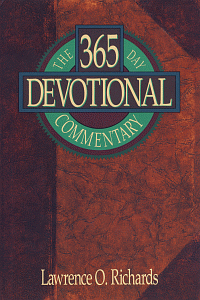 Through the Bible, through the year — with insight!

Tired of devotions consisting of a "warm thought and a prayer"? This 365-Day Devotional Commentary by Dr. Larry Richards gives you a whole year of readings and commentary that help you see the Bible as a living book designed to communicate God's heart to people just like you! Use it in your personal quiet time and also when leading family devotions. You'll gain new insights as you internalize the life-changing encouragement, comfort, challenge, conviction, strength, and assurance that God has woven throughout His Word.