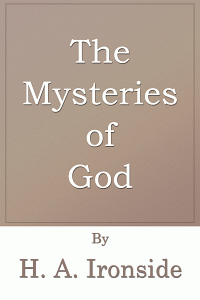 Look Inside
The Mysteries of God
By: Harry A. Ironside (Author)
Publisher: Horizon Press
Category: Theology

In The Mysteries of God, Ironside challenges believers to pursue and value the things of God that were once veiled in secrecy, but have now, through Christ, been revealed. Ironside discusses the revealed Kingdom of Heaven, the Olive Tree of Israel and the Gentiles, Christ and the Church, the Rapture, the Man of Lawlessness, and others. This book will serve to be a good primer on the dispensations and the secret things of God.

About the Author
Dr. Henry (Harry) Allen Ironside (1876-1951) was presented in 1930 with an honorary Doctorate of Letters degree from Wheaton College, and, in 1942, Bob Jones University awarded him an honorary Doctor of Divinity degree. He began preaching in Los Angeles at the age of fourteen and later served as a Bible teacher, Evangelist and Preacher. He was President of the Western Book & Tract Company, and for six years he was professor of Biblical Literature at the Evangelical Theological College in Dallas, Texas. In 1930, he became the Pastor of Moody Memorial Church in Chicago, Illinois. Dr. Ironside was known to preach twice each Sabbath to audiences of over three thousand at each service.

During his day, Dr. Ironside was widely and favorably known throughout the United States, Canada and Great Britain. He was one of the most outstanding Bible teachers and preachers of his time, a man of God, with a message from God, which he delivered in the power of God. His life was a benediction to all who knew him and his ministry enriched the Christian church. He authored over thirty volumes, many booklets and numerous articles in the religious Press. From the long list of his published works, mention should be made of Notes on Jeremiah, The Minor Prophets, Notes on Proverbs, Ezra, Nehemiah, and Esther, Lectures on Daniel the Prophet, Lectures on Revelation, Lectures on Romans, Lectures on Colossians, Lectures on the Epistles of John, and Notes on Hebrews and Titus. Ironside also served as the editor of The Moody Church News.