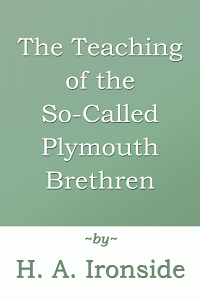 Look Inside
The Teaching of the So-Called Plymouth Brethren
By: Harry A. Ironside (Author)
Publisher: Horizon Press
Category: Theology

In this short volume, Dr. Ironside examines the critiques made of the Plymouth Brethren in Baptist theologian Dr. A.H. Strong's Systematic Theology. He considers the quotation Dr. Strong uses from Plymouth Brethrenism Unveiled. He then systematically examines each false church principle and heretical teaching charged against the Brethren. He considers whether or not the principle or heresy claimed is truly out of line with Scripture and whether or not the Brethren adhere to it. Finally, he explores further remarks made by Dr. Strong concerning the Brethren and their teaching. This is a thorough analysis for those who may have an interest in the beliefs of the Plymouth Brethren and an admonition for those of us who might be careless in our estimation of different parts of the body of Christ.