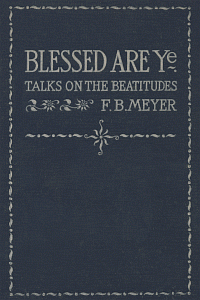 Full of hope and encouragement, F.B. Meyer begins his book by looking at the "eight gates" by which one might enter into the kingdom of heaven. As he says in his opening chapter, "There are eight doors into the blessed life...one, at least, faces each of us...Thou art not pure in heart: then that door into blessedness is blocked against thee, but thou art sore sorrowful that thou art not pure: then go into the kingdom through the door of mourning and contrition."

Beginning with Blessed are the poor in spirit, for theirs is the kingdom of heaven, Meyer traces through each beatitude with simplicity and forthrightness. He clearly explains what each condition is (and what it is not), how one might come into that condition, and what each blessing contains. A quick and delightfully insightful read, one is sure to be blessed by its content and message.

Dr. F.B. Meyer (1847-1929) began pastoring in 1870, and in 1872 he went to Priory Street Baptist Chapel. There he met D. L. Moody, who made a lasting impression upon his life and taught him valuable spiritual lessons. These two godly men formed a lifelong friendship.

During his long and fruitful life, Dr. Meyer preached more than 16,000 sermons. Said one author: "The phrasing of Meyer's sermons was simple and direct; he polished his discourses as an artist polishes a perfect stone. There was always a glowing imagery in his words; his speech was pastoral, lovely as an English valley washed in sunlight…In his day, great wars raged. Those who went to hear him forgot the battles."

F.B. Meyer preaches as a man who has seen God face to face