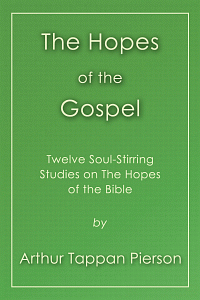 Look Inside
The Hopes of the Gospel
Twelve Soul-Stirring Studies on The Hopes of the Bible
By: Arthur Tappan Pierson (Author)
Publisher: Wordsearch
Category: Sermon Helps, Sermons

The apostle Paul reminds us that "we are saved by Hope," and nothing has a more refining, purifying, exalting influence on character than holy expectation based on divine promises. Hope is the echo of the soul's noblest desires; and like any other echo, it answers you with increasing delicacy and ethereal tenderness of tone, losing more and more all coarseness and carnality. This volume of sermons groups together twelve discourses, whose common center of unity is found in the various aspects of the hopes which they present and to which they appeal.