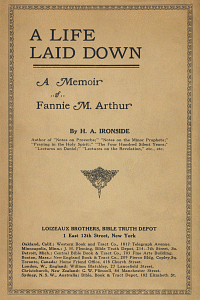 "Next to the study of the Holy Writ itself, there is probably no class of literature so stimulating and inspiring as Christian biography. Especially this is true when the person, whose life-story is under consideration, is one who was characterized by genuine piety and fervent zeal for Christ and the salvation of the world." Ironside pens these words as a preface to his introduction of just such a woman. Fannie M. Arthur was born the eldest child of William A. Arthur and Fannie M. Arthur on March 22, 1886. Fannie spent most of her childhood on the East coast, but a few influential years were spent in Costa Rica where her parents served as missionaries. This, in part, grew Fannie's desire to reach the lost with the gospel of Christ. Fannie would spend the majority of her adult life in service to the people of Central America and in the encouragement to the church in the States. A Life Laid Down chronicles Fannie's story of simple and determined obedience to Christ and will stir, challenge, and build up the hearts of those who read it.

About the Author
H. A. Ironside was an internationally acclaimed Bible teacher and preacher, as well as the author of more than 80 books and pamphlets. His writings include addresses or commentaries on the entire New Testament, all of the Old Testament prophetic books, and a great many volumes on other biblical topics. For 18 of his 50 years of ministry, Dr. Ironside was pastor of the famous Moody Memorial Church in Chicago, Illinois.