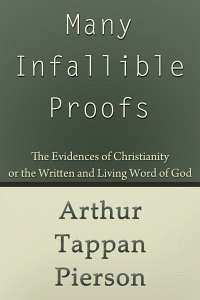 Look Inside
Many Infallible Proofs
The Evidences of Christianity or the Written and Living Word of God
By: Arthur Tappan Pierson (Author)
Publisher: Wordsearch
Category: Theology, Apologetics 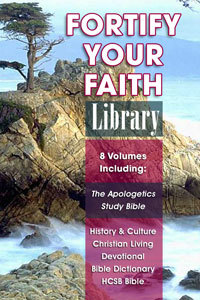 The writer of these pages once found himself getting into the deep darkness of doubt. Beginning at the foundation, he searched for himself, till he found the proofs ample-that the Bible is the Book of God; and Christ the Son of God. It was like finding one's way out of a dense wood into the full light of day.

Others are still in the dark; and these chapters are the "blazed" tress that mark the path by which one man got out of the forest. Perhaps some one else may try the same route, with a like result.

Some of his best known works include: Many Infallible Proofs: Chapters on the Evidences of Christianity, The Divine Art of Preaching, New Acts of the Apostles, Acts of the Holy Spirit, The Bible and Spiritual Criticism and The Bible and Spiritual Life. He was a consulting editor for the original Scofield Reference Bible,1909. After retiring, he continued to preach at churches and conferences at home and abroad until his death in 1911.

Only a man of wide and broad sympathies, and one who had himself come out of a conflict with doubts, could have so completely covered the whole battlefield of unbelief, meeting the doubter at every point with a candor that captivates, and a logic that conquers.