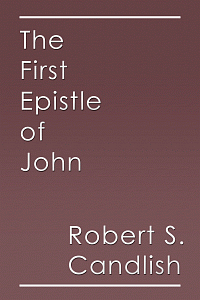 The First Epistle of John is considered Robert Candlish's greatest work and is regarded as one of the most remarkable expositions of this Epistle that has ever been published. In particular, the chapters on "Passing Away of the World," "The Test of Antichrist," "Christian Faith Overcoming Antichristian Falsehood," "The Love of God," and "The World Lying in the Wicked One" are hard pressed to be equaled by writers of the same passages. Alexander Whyte wrote this of Candlish as an expositor, "He would set himself to unwind and unweave its texture, filament by filament, and fibre by fibre, with the most minute analysis and the most practiced exegetical skill. And then how he would address himself to the reweaving of it all again, and that into a rich web of evangelical doctrine. After which he would, as it were, shape and fashion out of it so many gospel garments wherewith to clothe and adorn his listening and believing people..." It is our hope that this volume will challenge, encourage, and deepen the understanding of those who search out the words of this book with Bible in hand.

About the Author
Robert S. Candlish (1806-1873) was born in Edinburgh in 1806. He was educated at home and entered the University of Glasgow at the age of thirteen. At the age of seventeen, Candlish graduated from the University with a long list of honors and awards. In 1833, Candlish became the assistant at Saint George's Church where his oratorical skills, his ability to execute decisions, and his deep reverence paved the way for him to become one of the leading figures in the Free Church of Scotland. Dr. Fleming in his History of the Church of Scotland 1843-1874 says this of Candlish, "For thirty years he stood at the helm and he never lost his hold. He combined the bold wisdom of Moses with the fighting skill of Joshua...The Free Church could not easily have worked out her destiny without him. Behind the ecclesiastical leaders one felt the spiritual power of a true minister of Christ, with a heart of tenderness as well as an intellect of razor-like keeness." In addition to leading the Free Church of Scotland, Candlish was awarded a degree of the Doctor of Ministry by Princeton University, was a mentor to younger ministers, and was an ardent writer, whose works include among many, these few: Contributions Toward the Exposition of Genesis, Scripture Characters and Miscellanies, The Two Great Commandments, and Life in a Risen Savior.