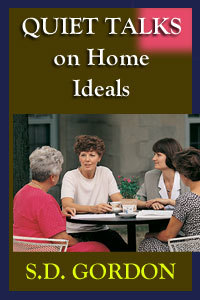 This little home message was prepared in direct response to letters received asking for helpful literature on the subject of home life. The inquiries were so earnest and revealed so much perplexity on these vital matters that the talks had to be written. They run through the life cycle, from the time of the making of the life-friendship of marriage, home, and small children to the sacred time of aging and children departing. Full of encouragement, memorable stories and illustrations, this Quiet Talks book will warmly fill the heart with encouraging wisdom.