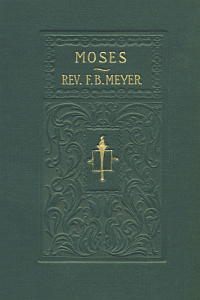 Moses: A Servant of God is a part of F. B. Meyer's Heroes of the Faith series. In this volume, Meyer uses Old and New Testament scriptures to give us an honest account of Moses - how he did not spring at a leap to the throne on which he has sat through the ages, but how his character took years to form, and that his mighty deeds were due, not to some rare combination of personal qualities, but to the faith which he had in common with the rank and file of the great army of the saints. The book is an attempt to show Moses as a man like any other man; with great qualities that needed to be developed and improved; with flaws that veined the pure marble of his character; with deficiencies that had rendered him powerless but for the all-sufficient grace that he learned to appropriate; and that he wrought his life-work by the simplicity of his faith, by communion with God, and by becoming a channel through which the Divine purpose was achieved.

F. B. Meyer preaches as a man who has seen God face to face.