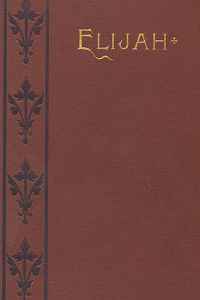 Look Inside
Heroes of the Bible - Elijah
and the Secret of His Power
By: Frederick Brotherton Meyer (Author)
Publisher: Wordsearch
Category: Literature, Biographies

Elijah and His Power is a part of the Heroes of the Bible series by F. B. Meyer. In this volume, Meyer examines the life of this mighty man who was filled with the Holy Spirit that we might also be encouraged to powerfully obey each request God makes of us. The times in which Elijah lived were treacherous - a young, beautiful queen with evil ambitions, a weak and perverse king, false prophets, idolatry streaked with debauchery and heinous crimes, raging wars, and the murder of all who stood for Jehovah. Yet against all of his adversaries and multiple attempts on his life, Elijah, strengthened by God, overcame his enemies, declared the truth, and proclaimed that there was only one true God in Israel.

During his long and fruitful life, he preached more than 16,000 sermons. Said one author: "The phrasing of Meyer's sermons was simple and direct; he polished his discourses as an artist polishes a perfect stone. There was always a glowing imagery in his words; his speech was pastoral, lovely as an English valley washed in sunlight…In his day, great wars raged. Those who went to hear him forgot the battles."

Good, exceedingly good. Mr. Meyer is a great gain to the armies of evangelical truth, for his tone, spirit and aspirations, are all of fine gospel sort.