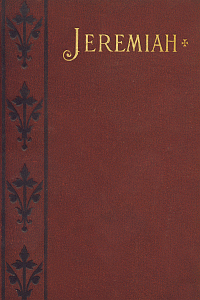 Jeremiah has always been a fascination to Christian hearts, because of the close similarity that exists between his life and that of Jesus Christ. Each of them was "a man of sorrows, and acquainted with grief"; each came to his own, and his own received him not; each passed through hours of rejection, desolation, and forsakenness. And in Jeremiah we may see, beaten out into detail, experiences which, in our Lord, are but lightly touched on by the evangelists.

This book seeks not to write a history of the last days of the monarchy of Judah, but to tell only so much of the general story as is needful to elucidate the part Jeremiah was called to play. The great personality of this man is hoped to be made more familiar through this work that it might encourage those who are compelled to stand alone, who fall into the ground to die, who fill up what is behind of the sufferings of Christ, and through death arise to bear fruit in the great world of men, which they passionately love.