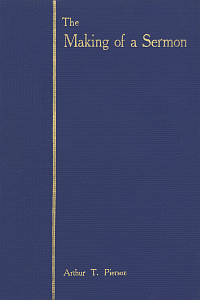 The Making of a Sermon begins with Pierson's advice on Biblical studies. With the heart of a pastor, he gently guides the reader through various principles for studying the Word of God:

Following are the results of Pierson's own such years of long study - brief outlines, full studies, parallelisms, and commentary on the text. Each entry begins with a title, a Scripture, and a simple or more developed outline.

Some of his best known works include: Many Infallible Proofs: Chapters on the Evidences of Christianity, The Divine Art of Preaching, New Acts of the Apostles, Acts of the Holy Spirit, The Bible and Spiritual Criticism and The Bible and Spiritual Life. He was a consulting editor for the original Scofield Reference Bible,1909. After retiring, he continued to preach at churches and conferences at home and abroad until his death in 1911.