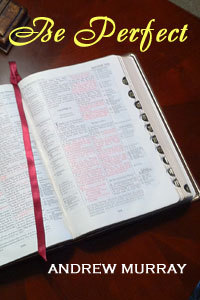 Look Inside
Be Perfect
A Message from the Father in Heaven to His Children on Earth
By: Andrew Murray (Author)
Publisher: Wordsearch
Category: Devotionals

Be Perfect explores the Word of God, noting the principal passages in which the word Perfect occurs, and seeking in each case from the context to find what the word was meant to convey. This work will encourage and assist you to be perfect just as your Father in heaven is perfect.