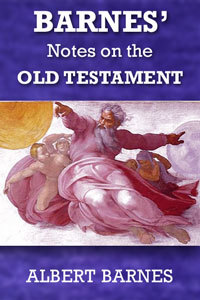 Known by many as simply "Barnes Notes", it was originally published in 1847. Over time, this great work has developed the reputation as a trustworthy and reliable commentary by pastors, preachers, and Bible teachers alike. Each book of the Old Testament features verse-by-verse commentary, with explanations and practical applications. Very conservative and Evangelical.

About the Author
Albert Barnes was was born in 1798 in Rome, New York. Barnes came under the influence of the writings of Thomas Chalmers, a Scottish Presbyterian writer, while studying for a legal career at Hamilton College. He became a Presbyterian, and in 1820 entered Princeton Theological Seminary. In 1825 he became pastor of the Presbyterian Church at Morristown, New Jersey.

In 1830 Barnes was called to the First Presbyterian Church of Philadelphia, but his call was challenged by the conservative, or "old-school," Presbyterians. They claimed that statements he made in a printed sermon, "The Way of Salvation," were out of accord with Presbyterian doctrine, especially on the imputation of Adam's sin and the nature of human will. Barnes's case reached the Presbyterian General Assembly in 1831, and for the first time sharp disputes arose between "old-school" and "new-school" Presbyterians in the Assembly. The Assembly, firmly in control of new-school men, acquitted him of the heresy charges. The publication of his book Notes Explanatory and Practical, on the Epistle to the Romans (1835) led to a renewed doctrinal controversy. Sympathetic to the new-school position, the 1836 General Assembly exonerated him, but the action stimulated old-school efforts to rid the denomination of new-school tendencies. The 1837 General Assembly, under the control of the old school, exscinded the new school.

Barnes was an advocate of numerous social causes, including temperance and the abolition of slavery. He was an eloquent preacher, but his reputation rests chiefly on his expository works, which are said to have had a larger circulation both in Europe and America than any others of their class. Barnes's commentaries sold an estimated one million copies during his lifetime and are still in print. He died in West Philadelphia on December 24, 1870.

Placed by the side of the great masters, Barnes is a lesser light, but taking his work for what it is and professes to be, no minister can afford to be without it, and this is no small praise for works which were only intended for the Sunday School teachers.