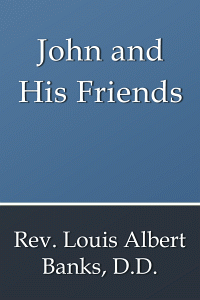 This volume contains thirty-three sermons preached by Louis Albert Banks during the revival meetings of January 1899. Covering themes found in the Gospel of John, the Epistles of John, and the book of Revelation, these discourses will rekindle the church's affection for her first love, encourage the servants of the Lord to be where their Lord is, and bring many to a saving knowledge of Christ Jesus. Piercing stories and insightful observations will make this a treasured addition to your WORDsearch library.