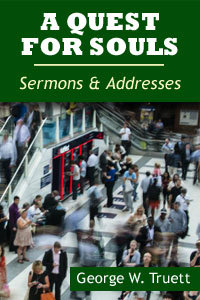 This volume contains twenty-four sermons by George W. Truett. Full of scripture and stories, these discourses will encourage and challenge the reader to run hard after Christ. Here are a few of the titles included:

About the Author
George W. Truett (1867-1944) was born in North Carolina and accepted Christ in 1886. In 1887, Truett founded the Hiawassee Academy in Towns County, Georgia, but followed his parents to Texas in 1889. The following year, Truett was ordained by Whitewright Baptist Church and soon thereafter Truett took the position of Financial Secretary of Baylor University. Truett began attending Baylor in 1893, began pastoring the East Waco Baptist Church the same year, and married Josephine Jenkins in 1894. Upon his graduation from Baylor, Truett accepted an invitation to pastor the First Baptist Church of Dallas. He remained in this position until his death in 1944.

One of the most notable figures in the twentieth-century - a man to whom, along with millions of Americans, I owe a debt in spirit.