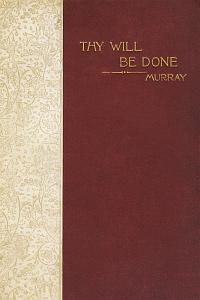 Look Inside
Thy Will Be Done
The Blessedness of a Life in the Will Of God
By: Andrew Murray (Author)
Publisher: Wordsearch
Category: Literature, Christian Living

Come walk with Andrew Murray for 30 days and discover more about the blessed will of God and how to conform your will to His will. Written in brief chapters, the words of this godly man will surely encourage, stir, and move you to promptly find and do the sweet will of God.

Andrew pastored churches in Bloemfontein, Worcester, Cape Town and Wellington, all in South Africa. He was an amazingly prolific Christian author. All of his publications were originally written in Dutch and then translated into English. As his popularity grew, Murray's books found their way into more than twelve foreign languages during his lifetime alone. Murray is best known for his devotional writings, which place great emphasis on the need for a rich, personal devotional life. Several of his books have become classics, including: Abide in Christ, Absolute Surrender and Waiting on God.

Murray was an alert and intense man. He died on January 18, 1917 - four months before his eighty-ninth birthday. For his contribution to world missions, he was given an honorary doctorate by the universities of Aberdeen and Cape of Good Hope.