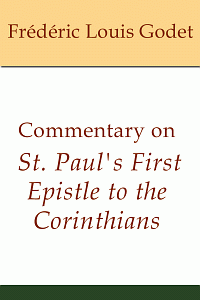 Godet's commentary on 1 Corinthians begins with a brief introduction that traces the history of the church of Corinth, the external circumstances that necessitated the writing of the epistle, the events which took place at Corinth between the time of its founding and the composition of the epistle, and the plan of Paul's letter. Following the introduction, Godet begins his commentary on the text. Verse-by-verse Godet examines each passage in light of other biblical texts, original language manuscripts, academic works, and other commentaries.

About the Author
Frederic Louis Godet (1812-1900) was a Swiss Protestant theologian. After completing his education in theology, he was appointed as a professor of the same subject in Neuchâtel. Shortly thereafter, he held a pastorate, while maintaining his teaching responsibilities. In 1873, Godet helped found the Evangelical Church of Neuchâtel.