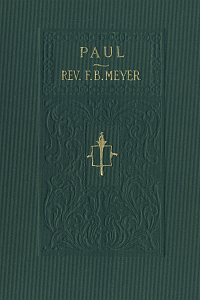 From the Preface:
Of many of the Sacred Biographies I have written this has been by far the most interesting. For days and weeks together I have lived in the company of the glorious man; but only to feel that he transcended all one's loftiest conceptions. Like some great mountain ranger, the more his character is traversed, the more it grows on the imagination.

During his long and fruitful life, he preached more than 16,000 sermons. Said one author: "The phrasing of Meyer's sermons was simple and direct; he polished his discourses as an artist polishes a perfect stone. There was always a glowing imagery in his words; his speech was pastoral, lovely as an English valley washed in sunlight... In his day, great wars raged. Those who went to hear him forgot the battles."