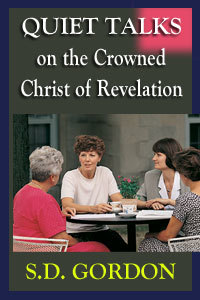 From the Introduction
Crowning the Christ is an intensely practical thing, whether taken in the personal sense or the world sense. He has been crowned in the upper world. With wondrous patience and graciousness He pleads for the personal crowning in our lives. Some day - no one knows just when - He will begin to act as the crowned Christ in all the affairs of our earth.

God is intensely practical. Jesus was never concerned about speculation nor mere discussion; He was too intent on helping people. The Bible is wholly a practical book. It is concerned only with helping us. It does not tell us all the truth there is; we shall be constantly learning more in the future life. But it does tell us all we need to know now. And its purpose in telling us what it does is wholly practical - to urge us to right choice, and to lives that square with the choice. This is the purpose that decided just what truth should be told in the Book.

There is one book of the sixty-six devoted wholly to this subject of the crowed Christ - The Revelation of John. Every one of these books touches Him at some angle, and finds its deepest meaning in what He was to do and did do, and yields its secrets only under the touch of His hand. But this book, the closing and climax of all, the knot in the end of the inspired thread, this deals wholly with the action of the crowned Christ.

No book of the sixty-six has seemed so much like a riddle and set so many a-guessing. And without doubt much of its meaning will be clear only as events work themselves out. Events will prove the only expositor of much. But it is with the deep conviction that this is wholly a practical book, written wholly from a practical point of view, and concerned wholly with our practical daily lives, that I have ventured to take it up in this series of simply, wholly practical, Quiet Talks. And it is only this side of its teachings that will be dealt with here. The Book is a street leading into the true overcoming life the Master would woo us to.

It is only after many years' study of this Book of the Revelation, and a special study the past three years and a little more, that I have ventured to put these talks together. And now they are sent out with the earnest humble prayer that others may find some little practical help in prayerfully reading, as I have found much in prayerfully studying, under the Master's gracious faithful touch.

It is a magnificent work written by a man who is on fire with the spirit of the Crowned Christ and will help to make the church realize her first and greatest mission of winning the world for Christ.