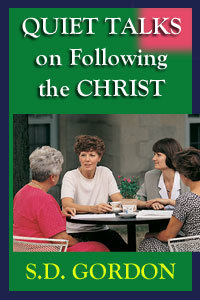 In his distinct and admired style, S.D. Gordon gives words to the heart and character of Christ - the one we seek to follow. He eloquently, yet plainly, describes Christ's drawing power on all people; his desire to make man his friend; his dependent life on the Father; his worldly poverty and Spirit wealth; his Father-pleasing, obedient, sacrificial life; and, his great thirst for us to follow after him. Gordon seeks to give the follower of Christ practical help. He expounds on what can be seen ahead and how to traverse the level road with the help and power of the Holy Spirit. He speaks, too, of the road that leads to the valley of suffering and sacrifice and the road that leads to the experiences of gladness and glory on the hilltops. In the last four chapters of this work, the author spurs the reader on to love Christ completely, to follow with absolute loyalty, and to reach the goal of seeing Christ face-to-face.