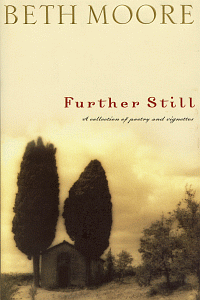 Beth Moore was raised in a small Arkansas town, in a modest home perched on top of the tree-clothed Ouachita hills. The house burst at the seams with five children, two parents, a grandmother, and no less than two dogs at any given time. One of her most memorable routines was waiting anxiously for her mom to return from the Piggly Wiggly with endless sacks of groceries so that she could pillage through them for her newest Big Chief Tablet. Immediately she would begin to cover the pages with an illegible form of cursive writing which she had made up herself. Still, she would cover the page with one hand as she wrote with the other so that no one could peek over her shoulder. When it was finally full, she would add it to the stack of other tablets and hide them careful so that no one could steal them. She had to keep them, because one day they would all be published. She was certain she was destined to raise the eyebrows of all America with infinite volumes of romance novels.

Her childhood vision wasn't completely distorted. She would grow up and write. But it would not be about a host of leading men, some tall, dark and handsome, others blonde and blue-eyed, and still others with a more distinguished resemblance to Cary Grant. There would just be One...and her only reliable source said that He had "no beauty that we should desire him."

The scrawny child who scribbled her way through dozens of Big Chief Tablets was right about this one. It is a romance novel. The only difference is that her leading man is yours for the asking.

About the Author
Beth Moore is a writer and teacher of best-selling books and Bible studies whose public speaking engagements carry her all over the United States. A dedicated wife and mother of two adult daughters, Moore lives in Houston, Texas, where she is president and founder of Living Proof Ministries. Her books include Praying God's Word, Believing God, Breaking Free, When Godly People Do Ungodly Things, A Heart Like His, The Beloved Disciple, and many others.