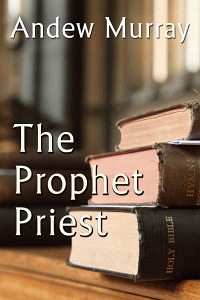 With the text of Hebrews by his side, Murray explores the role of Jesus as our Prophet and what this means for us practically as a body of believers and as individual followers of Jesus. In his second discourse, Murray again looks at Hebrews to teach us about Jesus' role as our High Priest. As he says, “What is the object of priesthood? The restoration of fellowship with God. The priest was to take the sinner into God's presence.” In his third sermon, Murray encourages us to take the scripture seriously that says, “Let us draw near.” In his warm style, his words seek to strengthen and build our faith up in God's provision of nearness. Finally, Murray discusses what it means to have the Lord as our meat and drink. Earnestly, Murray ushers us into the invitation to die to sin, the world, our own will and to live in the resurrection power of Jesus.

About the Author
Andrew Murray Jr.(1828-1917) was the second child of Andrew Murray Sr., a Dutch Reformed Church missionary sent from Scotland to South Africa. Andrew Murray Jr. was Born in Cape Town, South Africa. His mother had connections with both French Huguenots and German Lutherans. Andrew was sent to Aberdeen in Scotland for his initial education together with his elder brother, John. Both remained there until they obtained their M.A in 1845. From there they both went to the University of Utrecht where they studied theology. Both brothers were ordained by the Hague Committee of the Dutch Reformed Church on May 9, 1848 and returned to the Cape.

In 1889, he was one of the founders of the South African General Mission (SAGM), along with Martha Osborn and Spencer Walton. After Martha Osborn married George Howe, they formed the South East Africa General Mission (SEAGM) in 1891. SAGM and SEAGM merged in 1894. Because its ministry had spread into other African countries, the mission's name was changed to Africa Evangelical Fellowship (AEF) in 1965. AEF joined with SIM in 1998 and continues to this day. Murray was an alert and intense man, he died on January 18, 1917, four months before his eighty-ninth birthday. His burning desire to transpose all that lay on his heart and spirit to paper was revealed in the presence of several manuscripts in various stages of completion at the time of his death.